WHO IS DAVID ICKE? AN IDIOT. 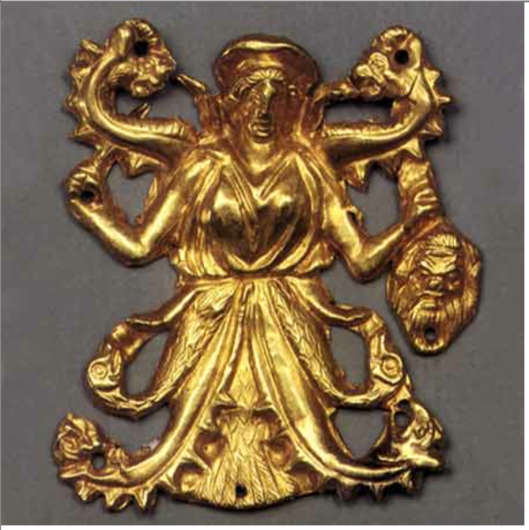 “Reptilian agenda” is a project of the Synagogue of Satan, to alienate from us our Scythian-Sak ancestral legacy.

Did you see the Pergamon Exhibit at the Metropolitan Museum in NYC in June 2016? The exhibit represents the permanent exhibit in the Pergamon Museum in Berlin. The imagery and symbols are so important that Germans transported the whole frieze of the Temple of Athena from Anatolia to Berlin, alongside with the Swastika mosaic floor. Germans did not loan the frieze to the Metropolitan Museum. So, New York Satanists exhibited only the photographs of the frieze.

The frieze of the Athena Temple depicts the Half-Humanoid-half-Reptiloid Titans (read: Scythians-Saks) fighting the humanoid Hellenic “Gods”. Evidently, the Satanic elites would like to identify themselves with Titans. First of all, we, Russian-Aryan Scythian-Sak “Titans”, had global domination three times in the Ancient history, according to Ancient sources. Second, we, Russian-Aryan Scythian Sak Titants, are direct decedents of the Antideluvian civilization of Giants / Titans which had Quantum technologies. Third, we, Russian-Aryan Scythian-Sak “Titans”, still have the largest country in the world — RAssia, and the largest deposits of natural resources, including water. 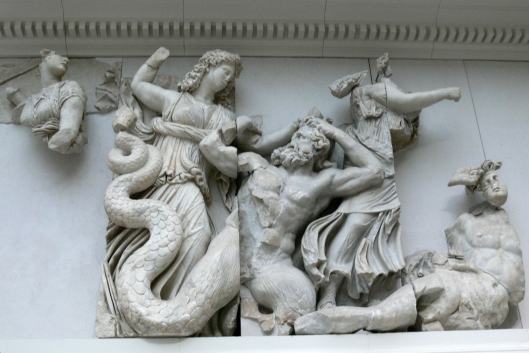 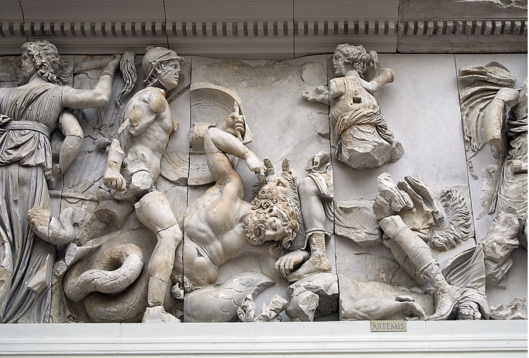 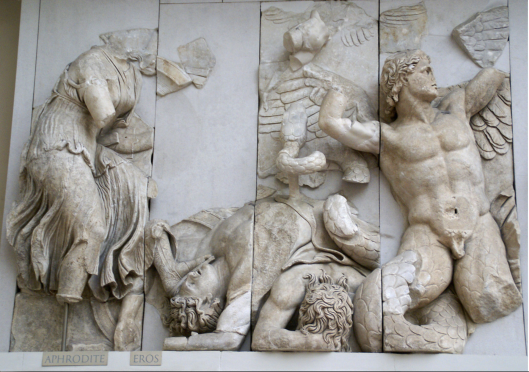 Matriarchy was before Patriarchy. Patriarchy, including homosexuality and pedophilia, was established by Greeks, the branch of our Russian-Aryan Scythian-Sak tribe. The major theme of Ancient Greek culture is their struggle against Amazons (Ama-Sar = Sar-Mat = Tzar Mothers) — the previous, Matriarchal, culture, thoroughly Russian-Aryan, Scythian-Sak. Our ancestral mothers Sar-Mat = Ama-Zar = Amazons beat Greeks, and did not let them into Crimea and Anatolia, i.e., Assia / Asia.

Because Greeks abandoned Matriarchy, this caused the great degeneration of their culture, since women-Matriarchs were teaching children. Scytnian-Saks had alphabet consisting of 49 letters, and Greeks got only 24. By the way, precisely the Scythians-Saks invented all devices of agriculture and war, according to Greek sources, and taught Hercules archery. And only after that, Hercules gave rise to “noble” families of Greece.

We, Scythian / Sak / Skolot / Sakoloven / Skloven / Sakaliba (in Arab sources) derive our name from Russian word for Falcon — Sakol / Sokol. Falcon was called RArog, from RA for Light. “RAssian” literally means the one who comes from the Light RA, and comes back to the Light RA. Our major river Volga was called “RA” in the ancient times.

Sun-Woman was also called as AR-GA / YAR-GA (swastika), ARGONA (like in Arganauts and Orgonon) / ARKONA (like in Arkaim), and was also depicted as SWAstika (SVA is derived from SVET, the other RAssian word for Light).

Greeks demonized GREAT MOTHER SUN RA, and depicted her as Medusa-Gorgona, a Reptilian, whose glance was so terrible that was turning man into stone. “Gorgona” is precisely Argona / Arkona (like Arkaim), since “g” / “h” is a Greek prefix, and even simpler (and more base) — an apostrophe before our RAssian-Aryan Scythian-Sak words.

“Gorgona” was turning our enemies into stone, because our ancestors were putting her in gold on their shields, so that golden face of our Great Mother RA was blinding enemies, like Sun in the skies!

Every warrior-woman also had [G]Argona on her chest. All depictions of Athena have [G]Argona/Arkona on her chest. This testifies to the fact, that Athena was herself an Amazon / Ama-Tzar / Tzar-Mat (Sar-Mat / Sarmatian), Ruling Mother of RAssia.

Welcome to the truth. 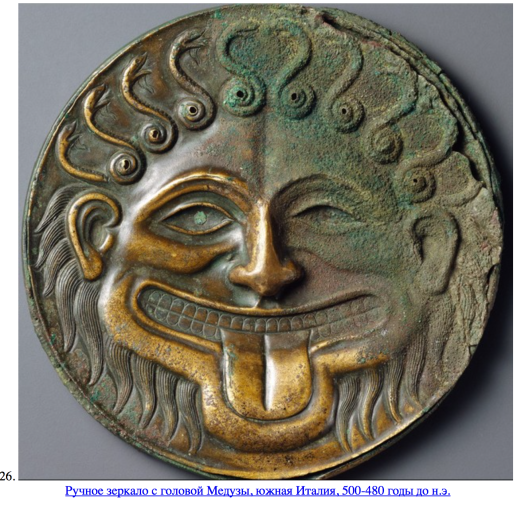 Icke is a stupid, mediocre and retarded idiot. On psychedelics and MK Ultra mind control.

PS Romanov-Koshkin, Vatican spies and British agents, had altered the name of our people in the 17th century via rewriting our ancient manuscripts and dropping letter “K” in “Skloven” / “Sakoloven” to make it into “Sloven”, and later into “Slav” (“Slave”), in order to split into parts our Great RAssian-Aryan Scythian-Sak Tribe RArog = Fiery Falcon / Griffon / Firebird / Phoenix. In reality, we, RAssian SAKS, and Anglo-SAX and German SAXons are ONE AND THE SAME NATION. Moreover, ALL NATIONS of the RAssian Empire, including Mongoloids (Kai-Sak = Kyrgyz and Kazakh) and all nations living in Caucasis, like Georgians, Ossetians, Armenians, Azerbaijanis, are various branches of our GREAT RASSIAN-ARYAN TRIBE OF SCYTHIANS-SAKS.