Irene Caesar, Ph.D., article “IN DEFENSE OF SOCIALISM” in the August 2017 issue of the “Socialist Factor” Magazine (Uttar Pradesh and London).

IN DEFENSE OF SOCIALISM 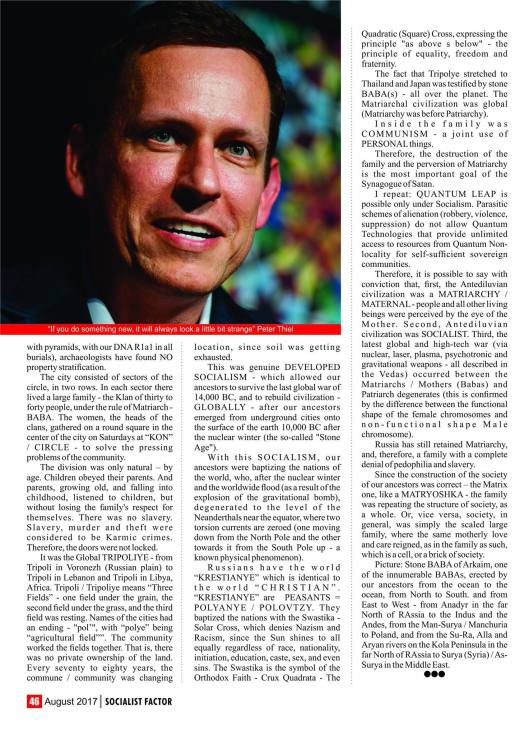 Those who ever lived in the United States know that “Socialism” is a curse word in the US. Socialism is equated to totalitarianism and suppression of individual freedom. “Freedom” and “democracy” of the United States is nothing else, but the rejection of Socialism. The US elites adopted the extreme forms of the anti-social Libertarianism, which they themselves also call “Satanism”. The essence of Satanism is egoistical profit above common good, expressed by Ayn Rand in her Satanic novel “The Fountainhead” when a heroine breaks the precious artifact so that other people would never see it, and the privilege of enjoyment would belong only to her.

Rand-style, “freedom” and “democracy” of the US Satanists is their all-permissive liberty of the global organized crime, engaged in illegal drugs, arms, slave, and organ trade. But the goal of Satanists is much more malicious: it is the complete destruction of the welfare state, with the annulment of all social benefits, the global depopulation, and the creation of the two-caste cyber slavery. Satanists agree to pronounce themselves “Reptilians” or “Cyborgs”, in order to become “different” from the general population, and justify their criminal appropriation of national wealth, destruction of environment, and Neanderthal rituals of human sacrifice and pedophilia.

80% of US food supply is GMO (Genetically Modified Organisms). GMO causes all kinds of degenerative diseases, like cancer, and infertility in third generation. As the result, United States have entered the stage of total genetic collapse, which concerns all living beings — humans, animals, insects and plants. In ten years from now, there will be no healthy child born in the US. And US will be full with Americans who are not only ugly, as hell, but also mentally disabled. Those Americans would not be able to think clearly. To this repulsive picture, we can also add the global testing of psychotronic weapons by NATO world-wide, the use of psychotropics on children, poisoned water (by fluoride) and air (by chemtrails) and legalization of drugs in the US. All these “achievements” of American “democracy” give us the gruesome picture of Apocalypse that would inevitably hit the US like a huge wave.

Now farmers are forced to buy seeds from Monsanto. It looks like that Satanists intend to force on humans the similar infertility, so that humans would buy the birth right from Elon Musk and Peter Thiel. Not Space X or Tesla Motors, but this fascist pervert power over men is what truly attracting an infantile psychopath Elon Musk who said that humans have “feline brains” in comparison to machines.

Space X and Tesla Motors are fake projects similar to the fake American landing on the Moon. The goal of these technological “wonders” is not to make technological leap, but, vice versa, to achieve total and complete “deindustrialization”, as it was formulated by the Club of Rome.

All these Neuro Links and Brain-Computer Interfaces, as well as more mundane cyber entities of the “Global Electronic Government” are simply the gates for the global cyber attack, which would be launched by Google from its floating servers in the international waters under the pretence of the “Anonymous” and “Terrorist” cyber attack. CIA, as the Proxy of the Global Organized Crime Syndicate “Octopus” aka self-named “Synagogue of Satan”, has twice recently tested the “gates” in the Windows software for this global cyber attack.

It is clear that Satanists are simply Neanderthals, who are not fully human any more. No surprise, they worship “The Beast”, and put predatory animals in the headings on their Facebook pages. No wonder that they rape their own children and drink children’s blood. Peter Thiel has regular “injections of blood from a child”. And no question that Satanists cannot make Quantum Leap, since they are unaware of the energy complications from drinking or injecting other person’s blood, and having other person’s transplanted heart.

Because of this Neanderthal blindness, Satanists sabotage all Quantum Leap technologies, which give self-sufficient and sovereign communities the unlimited access to energy and resources via the process of transmutation from the Quantum Vacuum. That is why Ayn Rand failed in all her promises. Instead of technological progress by the “Prime Movers”, which she promised, she smuggled in the impotent and degenerate Neanderthals, who are Zombie, Vampires and Pedophiles.

I would like to ask every citizen of India: does he or she want to buy the right to have a baby from the guy who subsists on a child’s blood? Do Indian citizens want to submit to Cannibals?

That is why we need to protect the values of our joint Russian-Aryan ancestors, who understood that Quantum Leap is impossible without Social Leap, and who knew that universe is 93% energy and only 7% particles, which are also just the congested energy. That is why, man cannot hide behind the wall from the orphan sobbing from despair. Wave information is passing through the walls.

Thus, so-called “Libertarianism” of Peter Thiel is either stupid, or totally criminal.

“Socialism” is not a notion of the English socialists. And “Communism” is not a notion of Karl Marx. Just as the “Communal-Clan System” is not the lowest stage of human development, as Marx argued. And the parasitic schemes of slavery and serfdom, or the debt bondage of “Capitalism” are not “more developed” or “more civilized” ways of self-organizing society.

In Arkaim, our Russian-Aryan swastika settlement of the Bronze Age in the Southern Urals (3,500 BC, near the complex of our Russian-Aryan half-ruined Antediluvian megalithic cities with pyramids, with our DNA R1a1 in all burials), archaeologists have found NO property stratification.

The city consisted of sectors of the circle, in two rows. In each sector there lived a large family – the Klan of thirty to forty people, under the rule of Matriarch – BABA. The women, the heads of the clans, gathered on a round square in the center of the city on Saturdays at “KON” / CIRCLE – to solve the pressing problems of the community.

The division was only natural – by age. Children obeyed their parents. And parents, growing old, and falling into childhood, listened to children, but without losing the family’s respect for themselves. There was no slavery. Slavery, murder and theft were considered to be Karmic crimes. Therefore, the doors were not locked.

It was the Global TRIPOLIYE – from Tripoli in Voronezh (Russian plain) to Tripoli in Lebanon and Tripoli in Libya, Africa. Tripoli / Tripoliye means “Three Fields” – one field under the grain, the second field under the grass, and the third field was resting. Names of the cities had an ending – “pol’”, with “polye” being “agricultural field””. The community worked the fields together. That is, there was no private ownership of the land. Every seventy to eighty years, the commune / community was changing location, since soil was getting exhausted.

This was genuine DEVELOPED SOCIALISM – which allowed our ancestors to survive the last global war of 14,000 BC, and to rebuild civilization – GLOBALLY – after our ancestors emerged from underground cities onto the surface of the earth 10,000 BC after the nuclear winter (the so-called “Stone Age”).

With this SOCIALISM, our ancestors were baptizing the nations of the world, who, after the nuclear winter and the worldwide flood (as a result of the explosion of the gravitational bomb), degenerated to the level of the Neanderthals near the equator, where two torsion currents are zeroed (one moving down from the North Pole and the other towards it from the South Pole up – a known physical phenomenon).

Russians have the word “KRESTIANYE” which is identical to the word “CHRISTIAN”. “KRESTIANYE” are PEASANTS = POLYANYE / POLOVTZY. They baptized the nations with the Swastika – Solar Cross, which denies Nazism and Racism, since the Sun shines to all equally regardless of race, nationality, initiation, education, caste, sex, and even sins. The Swastika is the symbol of the Orthodox Faith – Crux Quadrata – The Quadratic (Square) Cross, expressing the principle “as above s below” – the principle of equality, freedom and fraternity.

The fact that Tripolye stretched to Thailand and Japan was testified by stone BABA(s) – all over the planet. The Matriarchal civilization was global (Matriarchy was before Patriarchy).

Inside the family was COMMUNISM – a joint use of PERSONAL things.

Therefore, the destruction of the family and the perversion of Matriarchy is the most important goal of the Synagogue of Satan.

I repeat: QUANTUM LEAP is possible only under Socialism. Parasitic schemes of alienation (robbery, violence, suppression) do not allow Quantum Technologies that provide unlimited access to resources from Quantum Non-locality for self-sufficient sovereign communities.

Therefore, it is possible to say with conviction that, first, the Antediluvian civilization was a MATRIARCHY / MATERNAL – people and all other living beings were perceived by the eye of the Mother. Second, Antediluvian civilization was SOCIALIST. Third, the latest global and high-tech war (via nuclear, laser, plasma, psychotronic and gravitational weapons – all described in the Vedas) occurred between the Matriarchs / Mothers (Babas) and Patriarch degenerates (this is confirmed by the difference between the functional shape of the female chromosome and non-functional shape of the male chromosome).

Russia has still retained Matriarchy, and, therefore, a family with a complete denial of pedophilia and slavery.

Since the construction of the society of our ancestors was correct – the Matrix one, like a MATRYOSHKA – the family was repeating the structure of society, as a whole. Or, vice versa, society, in general, was simply the scaled large family, where the same motherly love and care reigned, as in the family as such, which is a cell, or a brick of society.

Picture: Stone BABA of Arkaim, one of the innumerable BABAs, erected by our ancestors from the ocean to the ocean, from North to South. and from East to West – from Anadyr in the far North of RAssia to the Indus and the Andes, from the Man-Surya / Manchuria to Poland, and from the Su-Ra, Alla and Aryan rivers on the Kola Peninsula in the far North of RAssia to Surya (Syria) / As-Surya in the Middle East.

Dr. Irene Caesar’s article “CHINESE SOCIALISM IS THE UNITY OF CHINESE CLANS BY THEIR RASSIAN ANCESTRAL GRAVES” in the May 2018 Issue of the Socialist Factor Magazine (Lucknow and London): 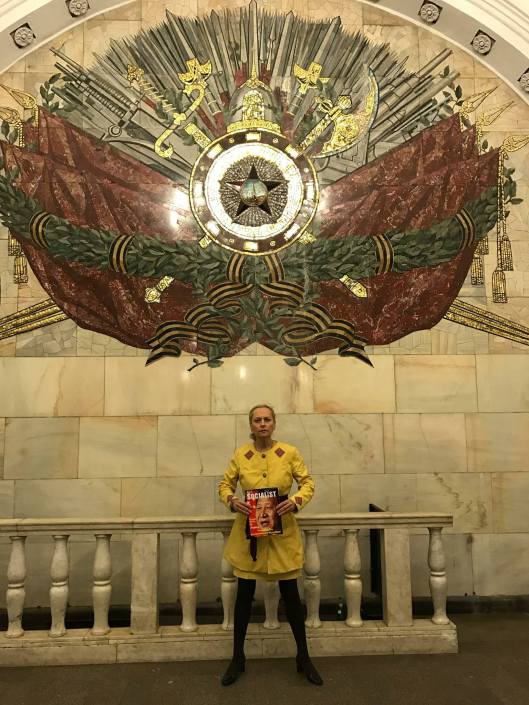 Dr. Irene Caesar with August 2017 Issue of the Socialist Factor Magazine in the Moscow Subway Station. 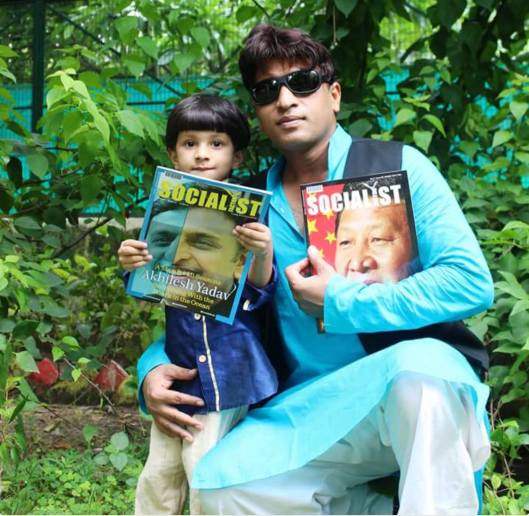 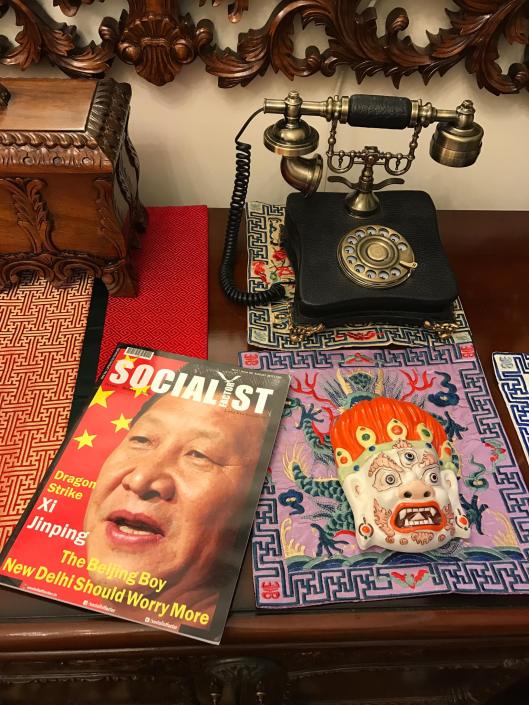 Dr. Irene Caesar in the City of Yalta, Crimea, Russia, where Stalin, Churchill and Roosevelt had signed the Post WW2 World Order Agreement. There can be no “New World Order”.  There is and will always be THE YALTA WORLD ORDER, May 9th, 2018.