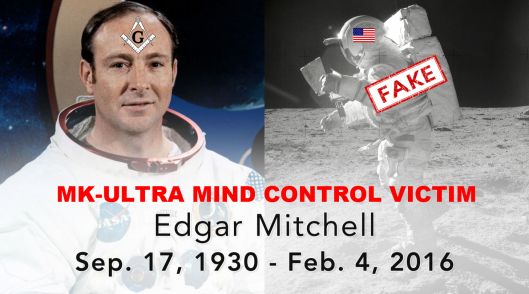 Edgar Mitchell was the first high profile victim of the American Satanist MK Ultra Mind Control Program. His entire experience of walking on the Moon was recorded into his brain via the Satanist MK-Ultra techniques under the supervision of the American arch-Satanist Michael Aquino, the founder of the Church of Set in the US.

At that moment, the badly educated and technologically inferior Americans did not know the USSR Psychotronic Mind control techniques till 1994 when the Russian scientist Igor Smirnov, father of Psychotronics, had revealed it to the satanist Bill Clinton in the Oval Room of the White House.

Predictably, American Satanists killed Igor Smirnov, and American Arch-Satanist Michael Aquino stole Igor Smirnov’s intellectual property and claimed it as his own, founding a company Silent Sound for the global covert Electronic / Psychotronic harassment on the way to the Global Cyber Zion, which is planed by Satanists as electronic concentration camp.

Americans have never been to the moon. They faked moonwalking with the help of Stanley Kubrick, who was threatened with his life into serving sick fantasies of impotent Satanists.

Thus, at the moment of Edgar Mitchell’s brain alteration, American Satanists could have applied to him the same technique as they did to Arizona Wilder / Brice Taylor and Cathy o’Brien, and other victims of MK Ultra.

Satanists were raping small girls at the age of three with excessive cruelty in order to break their sanity and subdue their minds. Because of horrible pain and humiliation, the mind of little children got compartmentalized into two separate parts as in schizophrenia, and they became susceptible to hypnosis, and totally controllable by their Satanist curators.

Later, both of these most highly profiled victims of MK Ultra, Arizona Wilder / Brice Taylor and Cathy O’Brien, got into automobile accidents and the shock brought up into their consciousness the lost and erased memories of Satanic abuse in the American Satanist MK Ultra Mind Control Program.

Satanists were breaking little children via sexual rape with excessive cruelty, because evidently they found out that only when they break man or woman in the early childhood, they can get the totally subdued mind slaves.

This is the obvious reason for the attempts by Satanists to legalize pedophilia. Satanic Pedophilia is the way of creating total slaves – mind slaves.

Infants, both girls and boys, were yelling out for help, and then, they were collapsing in convulsions, with their eyeballs rolling under the eye brow and their tongues out, and were blacking out.

Kinsey classified this inhuman torture … as “orgasm” in infants. He counted 1000 kinds of orgasm in infants.

Wernher von Braun revealed on his death bed that American Satanists would try to usher in their global domination (with legalization of pedophilia and human sacrifice) via fake Alien Invasion.

The same was confirmed by Ronald Reagan in one of his public high-profile speeches. Reagan said that the extraterrestrial threat to human civilization on Planet Earth should make nations submit to the One World Government (of Satanic nature).

Idiots from NSA were going around for decades in reptilian plastic masks in the backyards of stupefied Americans, and were flying the outdated American triangular ships all over the place.

But mostly, the American Satanists were raping small children in order to instill in their mind the idea of Aliens and Alien Invasion.

The Satanic plan for the fake alien invasion was a long playing program. It started in 1946-1947 when our ancestors together with us, their Russian-Aryan descendants, outed the Satanists’ fleet under Admiral Richard Byrd’s command from Antarctica (Southern Portal) with the inter-dimensional weapons of the Quantum Leap Era.

Before that, in 1926, Richard Byrd did a flight over the North Pole and flew into the inter-dimensional portal of the North Pole. On the other side, in the parallel dimension, Richard Byrd was met by our Russian-Aryan ancestors who looked Russian, were dressed Russian and spoke Russian.

But when in 1946-1947 the entire Satanist fleet was ousted from the South Pole portal with Russian-Aryan Quantum Leap weapons (“High Jump” operation of Satanists), it was both impossible to dismiss the event, and to ascribe it to Hitler, a crypto-Zionist.

In 1926 Richard Byrd have already reported that people on the other side were both in control of our dimension, and they were RUSSIAN. As a result, the CIA was formed immediately after Richard Byrd told the US Senate how the American fleet was defeated by ancient Russians — the direct ancestors of modern Russians. CIA was formed to deal with these facts.

Thus, the only reason of why CIA was founded was to conceal the fact that this planet was civilized by Russians and that Russians continue controlling our entire planet from the other dimension.

Hitler, the Zionist marionette, evidently failed to fool our Russian-Aryan ancestors, and was rejected by them, though he tried to appropriate our major ancestral symbol.

But Swastika cannot be the symbol of global genocide, since it designates the Absolute Light (Sva = Svet = Light in Russian). Sun gives light to everybody equally independently of race, nationality, social caste, initiation, education, gender, and even transgressions.

We come not from Orion, but from RA (“Ray”) / Arya = LIGHT, and return to LIGHT. RAssian literally means the one who came from Light and is Light. RAssia is literally the LIGHT = ” Heavenly Russia”.

And, indeed, German officers left some remarkable memories about the Kursk tank battle, the major tank battle of the WW2. They said that some advanced civilization was fighting on the side of Russians and alongside with Russians. Germans reported the plasma and laser weapons, and UFOs. Germans said that the metal of their tanks was melting, and tank protruding guns were twisted by some unknown high technological weapon.

Swastika, or Symmetrical Cross (Crux Quadrata = Gammadion) expresses global equality, fraternity and freedom – the anti-hierarchical symbol of “as above, as below”.

Though Russians were fighting under Red Star, the Crux Quadrata of global equality, fraternity and freedom was manifested in the metacentric shape of their chromosomes.

And though crypto-Zionist Hitler’s Nazi were fighting for the global genocide under Crux Quadrata of Swastika, their chromosomes did already have the asymmetrical, acrocentric shape of degeneration.

Alas, Zionists / Satanists realized that they did not fool our Russian-Aryan ancestors. And that was the moment when they have finally chosen the path of ultimate Satanism – extreme evil and crime. The path of final degeneration and self-destruction.

Now the entire American culture of Satanism / Zionism is the culture of psychopaths and schizophrenics. These people have finally lost all common sense and vision.

In fact, Satanic elites are running away from the US at the moment, anticipating the collapse of the US economy, which would happen thanks to their destructive efforts. Satanists / Zionists are the parasites which are leaving the half-eaten body of their victim – formerly glorious United States.

Richard Byrd was proclaimed “crazy”. And CIA started hunting for the ships of our ancestors, which were coming in from the parallel dimension. CIA and NSA major task is to carefully conceal any ties of the Ancient Quantum Era RAssian civilization to modern Russians, and to destroy Russians in any ways possible.

Smithsonian Institute of American Satanists destroyed the entire collection of giants, since these giants had Russian DNA.

Americans launched bacteriological warfare against Russians, as it was reported by Edward Snowden in January 2016. The US sends food and medicine for sale in Russia, which are infected by specially dangerous kinds of parasites. Americans create these patasites specifically for Russians in the secret Satanist laboratories in the US.

Snowden himself was sent to Moscow to spread rumors of “Tall Nordic Aliens”, since Americas could not pull the “Alien Reptilian Invasion” because of Russian EMF weapons, which would have downed any obsolete triangular ship of Satanists with NSA agents in reptilian plastic masks.

Shame on you Snowden! Judah and traitor! A clown and imbecile!

But let us return to Edgar Mitchell and his demands for the “UFO disclosure”. What is hidden in his demands? I took this long route to arrive at the answer, so that the reader would see the full picture in order to understand what really happened to Edgar Mitchell.

Since Edgar Mitchell was supposed to play such an important role in the Satanist Alien Invasion Hoax, we can say with no doubt that he was picked and groomed from childhood.

Edgar Mitchell was supposed to deliver fake moonwalking experience to the global public. His fake memories were supposed to be so firmly instilled in his brain that he would not waiver even for a second, or relapse into true reality.

Thus, we can conclude with no doubt that he had the same childhood as Arizona Wilder / Brice Taylor and Cathy o’Brien. Satanists broke him when he was a little boy, with extreme cruelty, via the ultimate humiliation and destruction of human dignity. American Satanists made Edgar Mitchell into their mind slave – SLAVE.

And we can claim with no doubt that Edgar Mitchell was a mind slave of Satanists till he died on February 4, 2016. After 1995, he was rather bombarded by Voice to Skull (V2K), which was recording upon liquid crystals of Nanobots (computers of molecular size) in his brain the fake memories of moonwalking over and over again.

Edgar Mitchell was a pretty little boy. One day he was taken by men in black. They raped him for hours. Little Edgar’s flesh got torn and his little body became one bloody mess. He was desperately yelling out for help, till he collapsed in convulsions, with his eyeballs rolling under his brows and his tongue out, and blacked out.

Meet the Hero of the United States of America, Ladies and Gentlemen!

He walked on the Moon!

PS Moreover, Edgar Mitchell was killed by American Satanists in February 2016, since their plan via Edward Snowden was cracked by Russians, and his own story of Satanic abuse could have gotten out to the world public when he was still alive. Rest in piece poor soul! Let the Heavenly Russia heal your wounds!

Now, when they killed Edgar MItchell, Satanists are still trying to capitalize on the Satanic abuse of Edgar Mitchell: