I, as the Founder & President of Wave Genome LLC (USA) & Matrix City LLC (Russia) am invited to Chair the Section “Role of Molecular & Cell Biology in Translational Medicine” at the BIT’s 8th Annual World Congress of Molecular & Cell Biohology in Fukuoka, Japan, October 14-16, 2018. I will also give a speech. My speech is titled: “Remote Management of Biosystems via Holographic Embryo Based upon the Wave Optics of Chromosomes as Modulated Scalar Wave Diffraction Grating”.

This is the recording of my Address to the Congress, where I speak of the looming Genetic Collapse.

Here is the video of my speech:

Universe is 93% energy, and 7% particles, as concentrated energy, including DNA. DNA exists as nonlocal unique Biohologram in the Biological Quantum Nonlocality, based upon Wave (Geometrical) Optics of chromosomes with precise refraction codes in the liquid crystal media. The same gene is expressed in functional individuals by metacentric chromosome, and in dysfunctional individuals via acrocentric chromosome. Chromosome is a lens with refraction code for focusing genetic information. Metacentric chromosome is analogous to a well-centered and focused eye crystal, while acrocentric chromosome is analogous to a myopic or farsighted eye. Violation of the DNA Wave Optics, either via introducing extraneous RNA or electro-magnetic radiation of any spectrum, results in cell and organ degeneration, and sterility in second generation, leading to Genetic Collapse across the species due to the cross-contamination. Bacteria and Viruses are lenses that change refraction in the liquid crystal media of DNA, so that we can deal with their mosaicism only on the holographic level. Wave Genome LLC was first in the world to apply Laser Bioholography for centering and focusing client’s chromosomes, both locally and remotely, creating chips which are analogous to lenses to center and focus chromosomes during cell division. Implication of the Holographic Principle states that if the Universe is entirely in its every Matrix Point, then, every Matrix Point is not simply different from any other Matrix Point, but is unique. If we have two copies of the same Wave Matrix, we can transmit information remotely and instantaneously between these two copies via Holonet (Holographic Quantum Biointernet). Wave Genome LLC developed the technology of recording and transmitting the holographic signal as scalar wave diffraction grating modulated by the immune modulators, RNA modulators, and Embryonic Stem Cell modulators, etc.

Irene Caesar, Ph.D., is a Founder of Matrix City LLC, Russia, company creating global subscription platforms for bioelectronic drugs (founded 2016); Founder and President of Wave Genome LLC, company producing bioelectronic devices and software for the distribution of bioelectronic drugs for rejuvenation only (founded 2010); Co-founder of “Matrix City” Consortium with the Institute for National Security in Moscow for building self-sufficient human settlements based upon the remote management of biosystems, climate and geophysical processes for the first time in the history of humankind (founded 2012), presented in the Honorary Lecture at the Harriman Institute of the Columbia University in September 2012; Co-founder of the Quantum Biointernet for the remote rejuvenation via distant laser signal, commercially offered for the first time in the history of humankind by Irene Caesar’s company Wave Genome in May 2013; Colonel of Irkutsk Cossack Military, awarded the Medal of Faith and Service to Russia (2014). Dr. Caesar received her doctoral degree from the Graduate Center of the City University in New York. 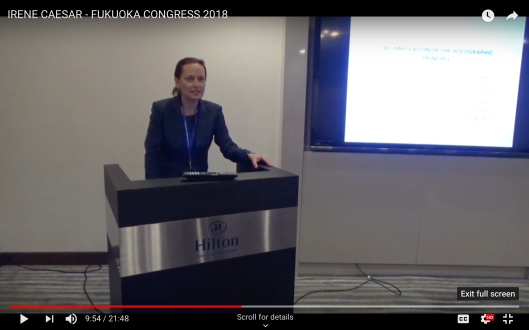