WHETHER AMERICAN INDIANS OWE APOLOGY TO US, WHITES

My Facebook friend Brian Berryhill wrote to me: “If it’s in your ability and heart to send healing energies to our Spiritual Grandfather Leonard Crowdog we would be grateful. He is oldest living Yuwipi Medicine Man from native America. He is in Acute Denver Hospital. He has MRSA. Chief and I are going to visit him today. If he permits I will give him a doctoring. We did ceremony for him this past summer before he got pneumonia. He contracted MRSA from his stay in Sioux Falls Hospital. Leonard Crowdog is the elder who the U.S. veterans recently gave a formal apology to in Standing Rock for the crimes our military conducted against the Native Americans in our country’s history. Blessings Irene

Formal apology…. We, RAssian-Aryans Scythian-Saks left North America in the 13th century AD. We closed our Swastika cities, all covered with Swastikas, put stones into window openings and doors and retreated to the territory of RAssia in an organized horse-vagon procession. With us, civilization left America. The Mongoloid tribes were not able to continue agriculture, irrigation, and written language culture. The irrigation canals were empty, and Mongoloids were afraid to enter our cities, which we left behind.

Mongoloids did not even master horse-riding, though the presence of Wheel Cult testifies that they saw our horses and our wheels. The Mongoloids, all these Navaho and Cherokee, called us “Ancestor-Enemies” – Anasazi. The Mongoloids pushed us out, since they were Cannibals. Around our abandoned cities, our bones were found which Mongoloids sucked out, and their fecalia with our digested flesh.

But Mongoloids remember how we were great. That is why they call us not only “Enemy Ancestors”, but also “Great Ancestors”. They remember that we, RAssians, were not racist and genocidal. We taught Mongoloids to build RAssian huts in Arizona desert from logs, like in RAssian Siberia, with ovens, like in RAssia, and to wear RAssian clothes covered with swastikas and flowers that are not growing in the desert of Arizona.

At the same time, those of Mongoloids, who never came under our patronage, were wearing animal skins and were building Vigvams out of branches of trees covered with animal skins. We, RAssians, were also intermarrying with Mongoloids. That is why, Mongoloids of America have heavy load of R1a1, and its variations.

Mongoloids also forgot that their Eagle is in reality Fiery Falcon RArog – SAKOL in RAssian language, which belongs to us RAssian-Aryan Scythian-Sak TRIBE OF THE FIERY FALCON / SAKOL RAROG. Apology… Why don’t Leonard Crowdog brings apology to me? Now, the Tribal Leaders, the same Mongoloids as in Siberia, refuse to dig out ancient graves. You know why? Because in these ancient graves, they dig out Ancient white, blonde, and blue-eyed Anasazi.

I would have brought apology to Mr. Leonard Crowdog for the Anglo-Sax cruelty, only after he officially and publicly would recognize that the origin of his culture is RAssian.

And after all of them condemn Zionists as true Neanderthals. Since, Anglo-Sax were taught the animal cruelty by the Zionist Neanderthals. Cannibalism of Zionists was and is more radical than the one by the American Mongoloids.

My other Facebook friend Michael Lee Hill wrote to me: “:-)
Native American Indians, The Anunnaki And the Knights Templar – The Future of America!”

Also Michael Lee Hill tagged me in the following images, which had the following text attached: “Eastlake Ohio Mound Builder homeland, future “MoonDance” site already has a Native American Indian Totem pole that was placed here recently, I wonder what it means?” 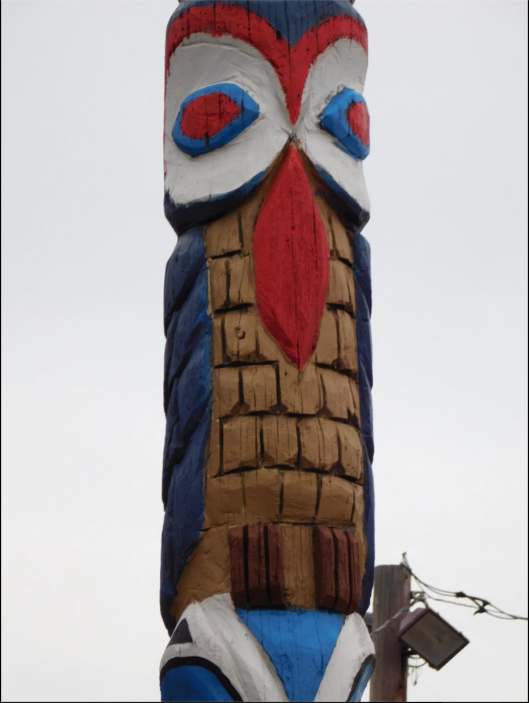 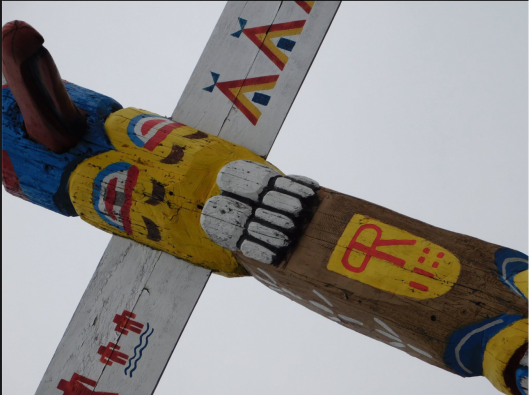 This is RAssian-Aryan Scythian-Sak Falcon-RArog. All Native Americans are RAssians, Sak-Scythians – the Tribe of Fiery Falcon / Phoenix / Firebid, originally white, blue-eyed and blonde, with heavy load of R1a1, and its variations. The territory of the United States is historically RAssian land. Anglo-Sax and German Saxons are variations of RAssian Sak-Scythians. Precisely RAssian-Aryans Scythian-Saks were building “Mounds”. “Mound People” of North and South America are RAssians. RAssia is all covered with MOUNDS.

Mounds are the most characteristic feature of our RAssian-Aryan Scythian-Sak ancestors. People found in these Burial Mounds all have R1a and its variations. They are white, blonde, and blue-eyed, down to Middle Ages. For example, Timur of Samar-kand was red-haired.

On the contrary, Free Masons and Templars are Zionists. Free Masons are the “Masons” of the Temple of Solomon. And Templars are the “Templars” of the Temple of Solomon. Meanwhile, Solomon and David were Royals from the Negroid Tribe of Judah, which also called itself the “Tribe of Set / Sata / Satan”, the Negroid God of the Darkness, Death and Desert of the Upper Egypt – Ethiopia and North Sudan.

These Negroids captured the White Russian-Aryan Scythian-Sak Lower Egypt, and established Semitic country Khemet (half-white-half-black). But, importantly, Negroids accepted the Matriarchal Rule of the RAssian-Aryan Mother-Falcon, which was the Solar religion, not very far removed from Christianity in its tenets. The major law was the help of poor members of the tribe by the more fortunate members of the Tribe — the Ancestral Socialism.

That is why the Tribe of Set renounced human sacrifice and pedophilia and even now is still praying to RAssian-Aryan Swastikas. Swastika expresses All-Unity of the Absolute Light, and equality of every human within the Absolute light, which is unconditionally within every human. This is the absolute rejection of hierarchy and initiation rites. “As above as below” is not the Satanic rule of Baphomet. But it is the Swastika (Crux Quadrata / Square Cross) law of our RAssian-Aryan Scythian-Sak ancestors.

Thus, Freemasons and Knights Templar as the degree in Freemasonry, with their hierarchy, initiation rites and misogyny, with their full support of the Zionist agenda of the “God’s chosen” Khazars / Fake Jews of RAssian blood, are the gross violation of our Ancestral Law and the disgrace of our Tribe. Knights Templar and Freemasons are building the Temple to the Negroid King Solomon, while trying to destroy RAssia, though precisely RAssians gave Negroes of the Upper Egypt the Solar Cult of All-Unity and All-Equality.

And Anunnaki were RAssian women-warriors BABA (Matriarch) and DEVA (Virgin) — from RAssian word for woman — “ONA” / “ANA” / “ANI”. Shame on Knights Templar! Shame on Freemasons! These degenerates and traitors of their ancestors and their people!

They are the vehicles of Zionists who are open Satanists and members of the Global Organized Crime Syndicate “Octopus” – “Illuminati from Berdichev”, the small town in the present-day Ukraine, beyond the line of settlement, where RAsssian Empire allowed Satanists to live for their crimes of human sacrifice and pedophilia.

Let all degenerates who committed human sacrifice and raped a child be reincarnated as monkeys! Down with the Monkey business of Freemasons and Knights Templar!

The desire of Zionists to create some mythic happlogroup “X” for “American Natives” instead of RAssian-Aryan variation of Native American blood is the Zionist agenda (1) to suppress RAssian-Aryan Scythian-Sak legacy in the United States; (2) to represent Scythian-Saks themselves as Semitic, i.e., “The Tribe of Israel”; (3) and via this corruption of our RAssian history, to suppress the FALCON LAW OF ALL-UNITY AND ALL-EQUALITY, thus introducing slavery, hierarchy, wars, misogyny, pedophilia, human sacrifice, and cannibalism.

As a whole, the Zionist agenda is to represent all Antediluvian and Post-Deluvian civilizations as Semitic, cannibalistic and pedophilic, though Khazars themselves (98% of World Jewery), especially Levites, are pure RAssian – R1a1, and though Negroes and Semites of Africa and Middle East accepted RAssian-Aryan belief systems as the foundation of their civilizations.

The ultimate goal is to make Sumer into the most ancient and Semitic / Israeli culture, though Sumer is in reality SAMARA CULTURE, purely RAssian-Aryan and Scythian-Sak, integral for Samarra Swastika Culture in the Northern Surya / Syria; Samaria in Palestine; city of Samara as the epicenter of the Sumer / Samar culture of Iraq; and the city of Samara and two rivers of Samara in RAssia to the left and to the right of river RA / Volga.

The targeting of Latino and “Native” Americans by Zionists is easily explainable because both of these cultures are cannibalistic, and are based upon human sacrifice to “WHITE GODS” who abandoned Neanderthals and their hybrids with Cromanyons in North and South America in 13th century AD.

Since the goal of Zionist Neanderthals is to rebuild the Third Temple to Solomon with the restoration of human sacrifice, they hope that they would easily sway Mongoloids to their side, since Mongoloids of North and South America were cannibals who were committing mass human sacrifices.

The only salvation from RACIAL WAR in the United States is the acceptance of true history and RAssian legacy. Or else, Mongoloids, Blacks and Whites will be soon killing each other for the benefit and joy of Zionist Neanderthals.

The name of this falcon was RArog, from RA for Light.

Our river Volga, main Russian river, was called RA in the Ancient times. And RAssia is, literally, the country of Light, and of Light people.

We, Sak, brought the cult of RA to Egypt and India.

So, Falcon Tribe is RAssian. And to be Sak or Falcon is the same as to be RAssian, since Falcon / “Sakol” is the symbol of Sun / Light, that is, of RA, RAssia. And that is why, Falcon is called RArog.

The 38th chapter of the Book of Prophet Ezekiel in the Tanakh / Old Testament speaks of country ROSH in the North, on river RA, as of more ancient, more civilized, and more technologically advanced than Judea. Precisely from ROSH / RASHA / RUSSIA, Elohim were flying in, from the North to the South, on Vimanas = Fiery Chariots.

Rivers ALLA, SURA, and ARYAN are located on Cola Peninsula right near the North (Sak) Ocean, as well as rivers Gang and Ganesh.

And thirty rivers near Moscow have IDENTICAL names to the names of rivers in Mahabharata.

Here we see the table of rivers’ names in Mahabharata and Moscow region.

So all so-called “Pueblo” settlements are our RAssian / Sak settlements. And when Anglo-Sax came to the North America, they in a way came HOME.

There is a huge cluster of our RAssian cities in Arizona, Colorado, Utah, California, and SCYTHIAN-SAK KURGANS (earthly mounds) all over the US.

We see there megalithic structures which were destroyed by gravitational bomb and plasma weapon, so that megaliths melted and were squeezed and deformed, and the top of the megalithic building was melted.

I SAW THE SAME IN ARKAIM JUST NOW, IN URALS.

EXACTLY THE SAME AS IN NYC, AND NEWPORT.

Moreover, Newport has a scythican building right on the central square.

And I saw the SAME IN HAMPI, INDIA.

But in Hampi, there was less of plasma weapon, and more of the gravitational bomb. That is why the megalithic blocks are not that deformed.

New York was Arkona too. Blocks in Brighton Beach are from the destroyed megalithic city. The major pyramid was in the Bronx Botanical Garden.

If the idiots destroy New York, they will be punished by the ancestors.

Great Ancestors, “Enemy-Ancestors” ANASAZI, are the same as ANASTASIA.

American Indians are our brothers and sisters, they have our blood.

The US “Eagle” was not EAGLE. That was FALCON.

My dream is to restore Falcon hunts (hunting with the help of Falcon) = our RAssian-Aryan / Scythian-Sak ancestral symbol. SAKOL RAROG.

We have so many cities called with the name of SAKOL / SOKOL (falcon) in RAssia.
https://irenecaesar.wordpress.com/2016/07/16/тайна-сфинкса-secret-of-the-sphinx/