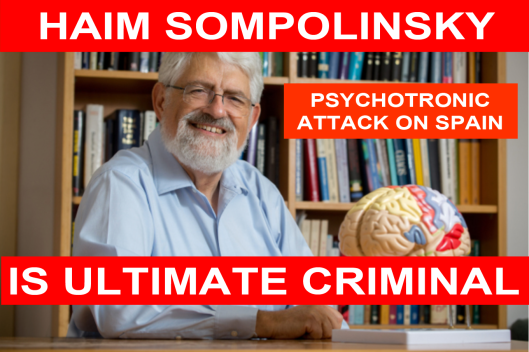 This should be on every news worldwide. Israel has attacked Spain with Israeli psychotronic weapons.  These psychotronic weapons are the Soviet technology that Mossad has stolen from Russia. This technology is based upon the use of psychotronic generators producing mass subliminal effect in a crowd, driving the crowd either to panic fear or to the insurmountable aggression, depending on the frequencies used. Mossad used these psychotronic generators in 1993 in Moscow when they captured power via the illegal anti-constitutional Coup d’état by their proxy President Boris Yeltsin. Participants of that event report that one part of the crowd felt the overwhelming aggression, and the other part of the crowd felt a panic attack.

Remarkably, together with the use of psychotronic generators, the Mossad snipers from the elite unit Jericho were shooting at both sides of the crowd. Mossad has repeated the same tactics, including the use of psychotronic generators and snipers, at the Maidan anti-constitutional Coup d’état in Kiev, Ukraine, in 2014. We can say with 100% assurance that the next horrific event that we would see in Barcelona is the shootings by Mossad snipers at both sides of the crowd – that is, both at Catalonians and the Spanish police. If you will see blood on the pavements of Barcelona, know: this is the Mossad unit Jericho making its appearance in Barcelona.

That is why in Barcelona, Zionists applied a modification of their psychotronic weapons, stolen from Igor Smirnov, the Russian Father of Psychotronics. Smirnov’s Psychotronics is based upon the combination of the high and low frequency so that one frequency is a carrier wave and the other one is a modulating wave. The efficacy of this approach is based upon the fact that two waves with different frequencies create the refraction optics of scalar wave inside the diffraction grating of two different waves imposed one upon another. Thus you can target an individual or a crowd remotely, through Quantum Nonlocality, when the focus of the refraction optics in the scalar wave biohologram is identical between the asset and the target, non-locally.

The other advance is that Mossad is using now smart phones and mobile phone towers. Google has already purchased a company that allows them to launch harmful software in their smartphones via remote imperceptible signal, and located their floating servers in the International waters for the global cyber war via psychotronic hits through the global network of their smart phones.

In the light of this events, I would like to attract attention of global audience to the devices by my two companies WAVE GENOME LLC and MATRIX CITY LLC, which are the only companies in the world that provide protection against this kind of psychotronic warfare. In its mass psychotronic attack on Catalonia, Mossad is using OBSOLETE PRE-QUANTUM LEAP technology, which is at least 30 years old.  What I am doing is the radically different technology, which is a much more advanced technology than anything that is used by Mossad.

My companies research, develop and use for production the Quantum Leap technology, called LASER POLARIZED BIOHOLOGRAPHY. It is based upon the use of the Geometrical Optics in chromosomes, and creating artificial LENSES in assisting human chromosomes in achieving more precise focus in the Geometrical Optics of chromosomes during cell division. Most importantly, LASER POLARIZED BIOHOLOGRAPHY cannot be, in principle, used to harm people. It can be used only for good. This is the essence of Quantum Leap, and that is why this technology is suppressed by Satanists.

But we can use the Quantum Leap technology of LASER POLARIZED BIOHOLOGRAPHY to create devices and software (digitized bioholograms) for the ultimate protection against the psychotronic and genetic warfare. This is precisely what my companies are doing. WELCOME TO THE QUANTUM LEAP!

It is an open secret in intelligence circles that a group of Israeli specialists in neuroscience and technology, has been working in secret for years in Catalonia in the implementation of techniques and technologies of mind control of masses.
The implementation of these technologies of brainwashing are explained by the massive street mobilizations of Catalan separatism, the radical nature of its subversive character, the transversality of this movement affecting people of different ages and the fanaticized obedience of these masses to the dictates of the Catalan-Zionist leaders.

The rise of radical separatism has not only been generated through the deceptive discourses of the separatist leaders and their means, but to a large extent on the basis of these brainwashing techniques, many of which have been induced through messages transmitted subliminally in the disastrous TV3, the authentic field of evidence of the international Zionism.

These subliminal messages cause the expansion of the pedophilia in the region, through the infantile club Super3, whose main function is not only to indoctrinate children in the separatist obedience, but also to favor the pedophile abuse networks run by the Generalitat’s Directorate General for Child Care and Adolescence (DGAIA).

In the last hours, there have been a series of facts that suggest that this mental control of the fanatical Catalan masses, is about to rise to a new step.

Last Monday, October 16, a large group of Israeli specialists, under the protection and guardianship of Mossad agents, has arrived at the Barcelona airport of El Prat, which suggests that some kind of great event is being supervised by Zionism in the separatist region.

The group, under the cover of the Israeli diplomacy, introduced technological device unknown by diplomatic pouch in Spain. It should be noted that this device was not particularly voluminous, although it is presumed that its content was especially sensitive because of the advanced technology.

The group was headed by HAIM SOMPOLINSKY, the prestigious Zionist neuroscientist, accompanied by a team of experts from Bar-Ilan University, The Edmond and Lily Safra Center for Brain Sciences, the Hebrew University of Jerusalem and the Sagol School of Neuroscience in Tel Aviv University. (The name of HAIM SOMPOLINSKY was erased from this article by Google, and was added AGAIN on November 23, 2017).

They were all received by Israel’s honorary consul in Barcelona, ​and ​the dangerous Zionist agent Josef David Sánchez-Molina Rubín, who has been playing for years with the patience of the Spanish government that he has repeatedly betrayed without having earned him a well-deserved punishment.

After being discreetly received by (the Satanist) Jordi Turull as a representative of the Generalitat, the scientists divided their activities into three groups. Some of them have been installed in the CTTI (Center of Telecommunications and Information Technologies of the Generalitat). Another group has been installed in the Barcelona Supercomputing Center, while the main group, with the collaboration of a multidisciplinary team of the Eurecat, makes use of laboratories and facilities of the UPC.

According to the first reports compiled by the CNI and leaked to the SIN networks, the team of Jewish scientists would be implementing the device known as “Pastor” (רועה צאן).
Broadly speaking, the device consists of an advanced software that uses mobile phone antennas to send hidden waves of different frequencies that can affect the human brain by inducing the desired behavior in affected individuals illegally.

In turn, mobile phones themselves also are instructed to emit these waves, making any mass demonstration on a ‘controlled herd’ (hence the name “shepherd” for that device), as we have seen happening in the separatist demonstrations, where the people gathered there respond in unison as if they had no will of their own and were controlled by invisible threads.

Such technologies would not have been effective a few years ago, but with the massive proliferation of smartphone use, anyone attending a demonstration sees their brain bombarded by waves from their own cell phone, as well as nearby cell phones, turning people congregated into an easily controllable fanatic mass.

The arrival of the Jewish specialists in Barcelona and the feverish work they are doing in the last hours, presage that, in the coming days, events will be precipitated and the masses, made blind and fanatized by the separatist order, will be used as shock force to implement the Catalan-Zionist project of destruction of our homeland, already turned into the last hope of the world in the fight against the Masonic-Jewish plan of world control.

Thank you, Haim Sompolinsky, that you did not ask me to remove the entire edition of the Indian glossy magazine “SOCIALIST FACTOR” that has published my article on your psychotronic attack on Spain in its December 2018 issue. Below is the text of the article, which has more information and analysis than my blog article: 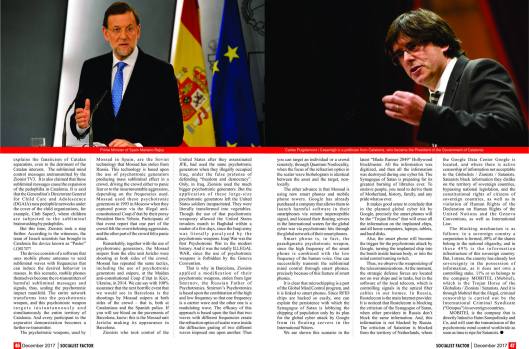